Small equipment is a bracelet item with one specific ability.

In addition, humans can have various abilities at once by installing small equipment in a heavy weapon.

■ How to use small equipment

Small equipment can be used simply by wearing it on the arm, and it can also be used by combining small equipment with a heavy weapon.

① Pick up small equipment with a mouse.

② Click the left button on a heavy machine equipped with a small device mounted on the mouse cursor on the back.

③ If the slot remains, the small equipment is synthesized in the heavy weapon.

If you right-click to neutralize the item without holding anything, the small pieces of equipment are separated one by one.

Scrolls are spell-written documents that can be used depending on the level of Kailipton’s ancient language decoding.

The type of scroll is determined.

In general, scrolls should be used after being placed in a magic book, but some scrolls are directly

It can be used.

The Spellbook is a kind of archive for recording scrolls, and it uses dozens of spells at once.

You can go around.

Scrolling can be recorded.

① Assign the spellbook and scroll with the correct level to the quick slot.

② If you press the number of the quick slot that contains the scroll, the scroll is saved in the spellbook.

③ Only one scroll of the same level can be saved in one spellbook.

④ Even if you don’t have the level of deciphering the ancient language, you can put the scroll on the spellbook, but you cannot use it.

⑤ If there are multiple spellbooks in the quick slot, scrolling is automatically saved in the spellbook that meets the conditions.

③ When you click an empty area, the cursor shape returns to its original state.

Each chip has 1 to 3 chips for each jewel, and when 5 lower chips are collected, they can be exchanged for 1 higher chip.

The exchange can be exchanged with the jeweler.

-The drop probability of gems is the same as before, and the chips have different odds depending on the series, but on average, they have several times higher probability than gems.

-Chips can be exchanged through the NPC, a jeweler opposite the warehousekeeper.

When exchanging, insert 5 chips of the same series into the exchange window and click NPC to change to the top chip or gem.

You can challenge with just one chip, but there are risks.

① Place only one chip to be upgraded in the exchange window.

② After clicking NPC, click only the number plate numbered 1 ~ 6.

③ If the number you have chosen wins, the chip in the exchange window will be replaced with the first-level chip.

④If you do not win, the chip in the exchange window will drop or disappear to the lower level chip.

In the case of the 1st chip, it falls to the 2nd chip, but if the 3rd chip fails, the chip disappears.

Adia’s Manastone Refining ability has been added as a standard.

Without special skill, Edia can refine the manastone.

When hunting monsters, the lowest level Amiga can acquire items such as manastones and manastone tablets.

Manastones are divided into 4 types, and the types of options that can be given are determined by the type of manastones.

Manastones can be refined by AIDIA by acquiring Amiga manastones and tablets of each level.

You can apply for purification by entering ‘// tablet ADIA name’ to ADIA.

When a window for refining appears , place the manastone to be refined and the refining agent together, and if the amount is raised, the corresponding adia can refinish the  manastone.

When applying a manastone, if you drop a manastone over the item to which the manastone is applied, a menu of applicable options appears.

Choosing one of these will grant that option to the item. If you select an option that has already been applied, you will be able to upgrade to Step 3 through Step 2  .

The figures for each step are already set for each option.

Depending on the type of gem used for the upgrade, the number and level of options you can attach will be limited.

In the case of armor, you can upgrade the Giga option from top-class items. Topaz-class item: Increased physical defense

When a character dies, one of the options given has a chance to drop one level.

[Changes to existing items due to the appearance of the manastone]

Some of the damage and defense options attached to the existing special items are replaced by other options.

Replaced options do not fall or disappear even if they die.

* For weapons, depending on the options

* In the case of armor, depending on the content of the option

The above values ​​apply, and the total damage increase obtained by using the manastone on the item is applied separately.

Therefore, they are attacked by monsters, but ordinary characters cannot attack monsters.

Edia’s charming wind skill level determines the summoning stones that can be used, and summons them according to obedience skill level.

The strength of the monster will be determined.

When obedience skill is raised, attack power and vitality are up to 3 times stronger and summoning time is also 2 times longer.

■ How to use Summon Stone

② Pressing the quickslot again will force the summoned to be returned to the summoning stone.

③ When summons are summoned and summoned again, the life force is filled.

(Summon time will be shortened if the summoner dies.)

① Use the Light of Life skill on your own summoner and your opponent’s summoner.

② We attack each other’s summons with characters.

③ Summoners attack each other.

(The character’s attack does not wear out damage.)

Likewise, if you use Edia’s Light of Life skill, you can attack summoners.

※ All sub-items are irrelevant to the character level and can only be used after raising the skill level.

※ All mobile devices can be used in a quick slot.

1. Move to the place you want to remember.

2. Use the designated transmission device in the quick slot.

3. When the designated transmission interface comes out, save it with the Save button in the order you want to register.

Up to 5 locations can be saved.

1. Insert the designated transmission device into the quick slot and use it.

2. The designated transmission interface comes out, and if you press the transfer button at the location you want to move, it moves to that location.

However, it cannot be used in peace zones, and in the case of designated transmission devices, it can only be moved in the zone.

In addition, some zones may be used only when using ragrush. 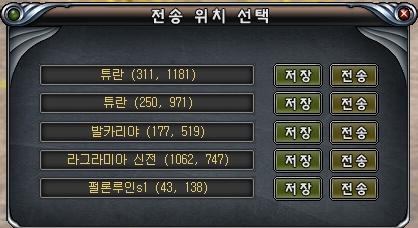