This quest will start automatically. The players began to attack the Monster anywhere with a similar level of their own character. Ruin Quest, players can start from level 10 and above by Evil King Dior Ruin Quest is successful when it appeared. Players can defeat Evil King Dior has a special mission, you get money, weapons or Ancient Artifact (which is used for a weapon, item 261), which can be repeated Ruin Quest cancellation. 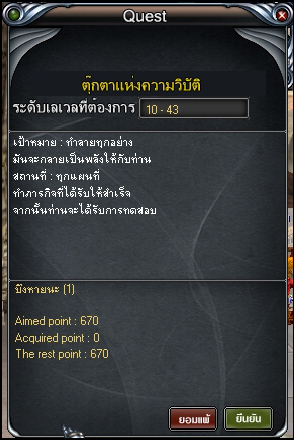 Acquisition of the Ruin Quest.
Level of the rating will vary according to the level of Monster Level can see the names of the four channels that are divided by Monster.

The Evil King Dior
Achieved by using the Item Name Ruin Barrier item which is to be awarded after the removal Monster and scored exactly as defined in Ruin Quest by Evil King Dior is a Level by the caller. 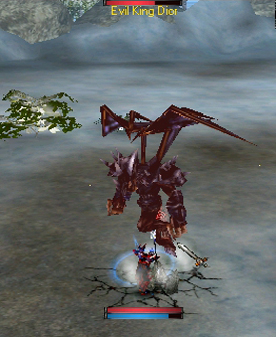 Then we will have a piece titled item Recored of Darkness.

After removal Evil King Dior, you will get Item. That can be redeemed at random. The prizes will include the item name Ancient Artifact weapon that can be assembled into 261 NPC is in Laglamia (in version 2005).