1. When you log in to Laghaim Client, choose the server you want to play (your character will appear in the chosen server) and input your ID Password for connect to the server. 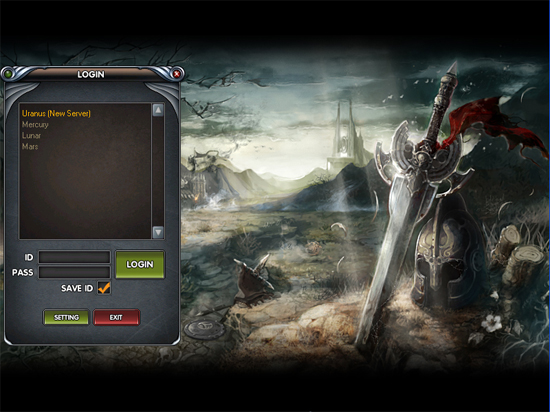 2. Character Selection
– After you log in, you will enter to character select screen. If you still not have the character, click “Create” button for create new character. 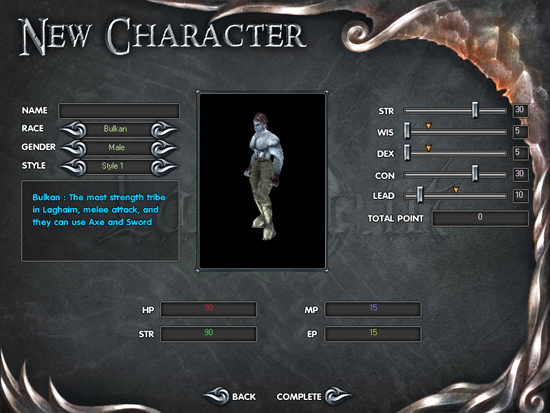 – From this screen, you will find that you can create most 5 characters. So if you want to input ID again, click “Back” button. And if you want to delete your character, click “Delete” button and there is the window appears for input your password to confirm delete character. 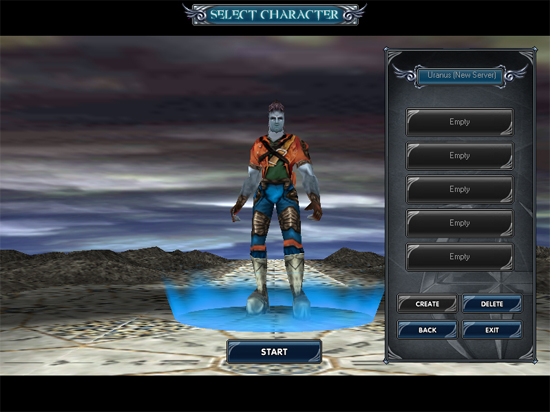 After you click “Create” button, you will enter to create new character screen and it have details following this:
Name : Input your name that you want and it must follow the specification in ID register page.
Sex : Choose between male or female
Hair Style : There are five types of hairstyle and two colors.
Race : There are five tribes in Laghaim and they are not having the similar.

Originally divided into two races, they were united into one tribe through the First War and became more

Exerting mighty power, it has been the most feared object of other races.

For them, the mind is just a means of supporting a strong body.

Understand the given situation as tribe-specific simplicity and fight in a way that relies solely on power.

A terrible primitive body with a terrible destructive power, a rudimentary and tireless. So the end of their battle

There is always bloody bloody misery.

Those who have ever fought Vulcan speak consistently. “They are demons.”

If anyone sees them fighting on the battlefield, anyone will relate.

No, I don’t want to recommend it.

Even thinking back is so terrible and painful. According to the history of the war, of the 21 tribes,

It is said that there are as many as 15 species that have been destroyed.

Ragheim’s Gentiles, they realized their ambition to become the master of the planet through the Second World War.

Based on advanced scientific technology and powerful firearms brought from Earth, he tried to dominate Ragheim, but tens of thousands of years ago.

It is not easy to conquer other races on this planet.

In the meantime, suddenly, by the attack of the Frogmare people, the Humans form an alliance with the other three races.

With a developed city in the south, they are commercially available in Ragheim based on abundant resources and advanced civilization.

It has played a pivotal role.

Kailipton deals with magic through training, and it is a high-strength flag that is particularly differentiated when it reaches a certain level.

Energy can be used freely.

After the First World War, they were somewhat pushed away from the Vulcan, but by taking the heart of Edia,

He succeeded in balancing the races.

After the Edia people lacking iron resources developed the mana enhancement agent, they gave them the trade of iron and stone.

It was proposed and the result of the negotiations.

They developed the principle of the magic enhancement technique called Bigger Cowards using Mana Enhancement, and then continued it.

It was to improve and have a strong power today.

In the east, their world is cut off from all outside.

Those who hate war and prefer peace, find their civilization centered around rivers and mountains.

He was able to handle magic at a much higher level than other races, but because of his tendency to guard against quarrels and antagonism.

Due to its relatively weak combat power, Edia effectively manages its own magic defenses and regional conditions.

By using it, it was possible to protect the village safely in the first war.

During the First War, their ancestors who desperately needed more energy for survival

As a result of repeated research on height, it is a combination of 3 minerals produced by Ragheim, and it improves mana and magic stones.

It leads to making.

The recipe for the Mana Enhancer used to recharge magic power is still wrapped in a veil, and it can be

The manastones used to inject special abilities are rare gemstone minerals such as Geno, Brince and Iron.

It was produced by mixing at a constant rate and applying high heat of 30,000 degrees or more.

Reactors used to apply heat can be produced by other races, but the golden ratio of the mix is ​​only for those races.

It is being transmitted in secret.

In the Second World War, Edia intervened directly in the war, but what they did was to maintain neutrality,

It was to prevent the balance from leaning too much to one side.

One of the greatest battles in history, the genetic combination of human and Vulcan originated from the battle history of U-714 anger.

Although he gained strong power through Frogmare’s bio experiments, the origin of the birth was so blessed

The unnatural birth of a hybrid only left anger at Frogmere and devoted all souls to the Frogmere.

I took the lead in overthrowing.

Human thought. The sins of mankind and the given circumstances …

Humanity dreamed of perfect evolution and a more perfect life.

I no longer wanted to make the same mistake, making the same mistake over and over again. Perfect evolution, adaptable to any environment, and no longer wanting to pay for the mistakes of making emotional mistakes. The project ‘Persistence’, which started so secretly, was a very unethical experiment. Sustained human experimentation of the participants in the experiment exceeded the level of human sins committed so far. The project of integrating ideas for the community rather than the individual was heading for success.

The unsafe body of the test participants was transformed into a machine, adaptable to any environment, and exceeded many of the limitations imposed on humans.

In addition, they shared memories, knowledge, and emotions through data transmission and reception with the main computer, with emotions gone. Above all, it achieved a machine culture that makes logical and cool judgments.

However, humans were unstable, and one of the scientists who led the experiment decided to make this result their own and enjoy eternal life and reign over humans.

One Frogmare division that raided the science lab killed 3/2 on only 12 gaseous specimens.

Frogmare was pleased with the ability to get this ability, and the maniac scientist projected

In order to erase the existence of ‘Persistence’ from the world except for myself, it disappears with Frogmare, which erased all data.

The thoughts of the 12 subjects integrated into the Mother set a goal objectively in a cool and objective way.

“The destruction of the scientist who betrayed them and the complete eradication of imperfect creatures ..”

You can specify your character point by yourself following this:

When you increase status point, it also affect to the point following this: